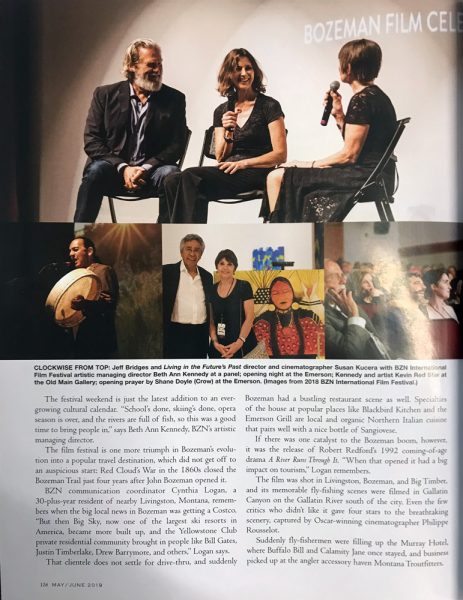 Kevin Red Star is in the May/June issue of Cowboys & Indians magazine, where he is pictured chatting with Bozeman International Film Festival Artistic Managing Director Beth Ann Kennedy at Old Main Gallery during last years film festival. Kevin looks forward to this years film festival which will be held is June 6 – 9, 2019. More info and tickets at https://bozemanfilmcelebration.com. And be sure to see Kevin’s paintings at Old main Gallery. 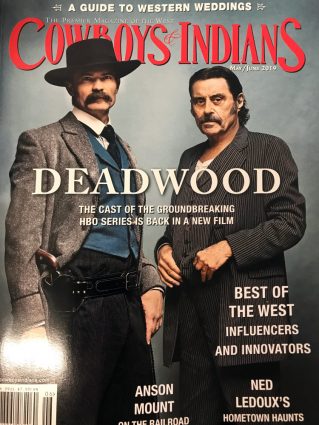 The Fall 2017 edition of Distinctly Montana features an article worth reading, “Montana’s Native American Women Smash the Couture Ceiling.”
See the article here and then go to pages 36 – 38. 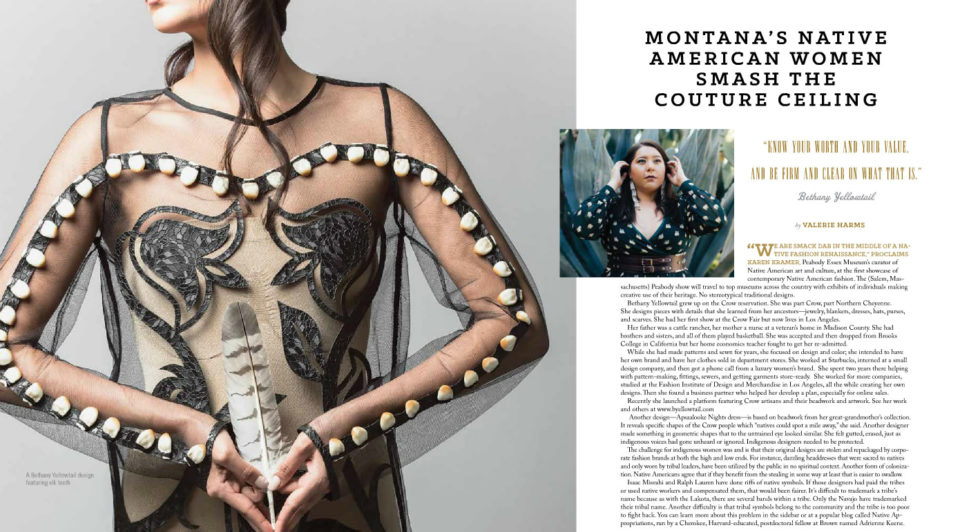 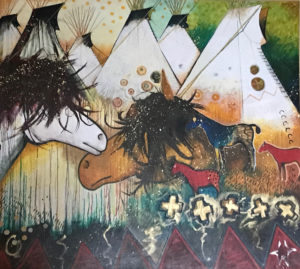 Yellowstone Public Radio interviewed Kevin Red Star on January 11 while covering the recent Ryniker-Morrison Gallery exhibit, “Many Blessings: Kevin Red Star with his Daughter Sunny Sky Red Star.” You can hear the interview and read about the event in their online article. 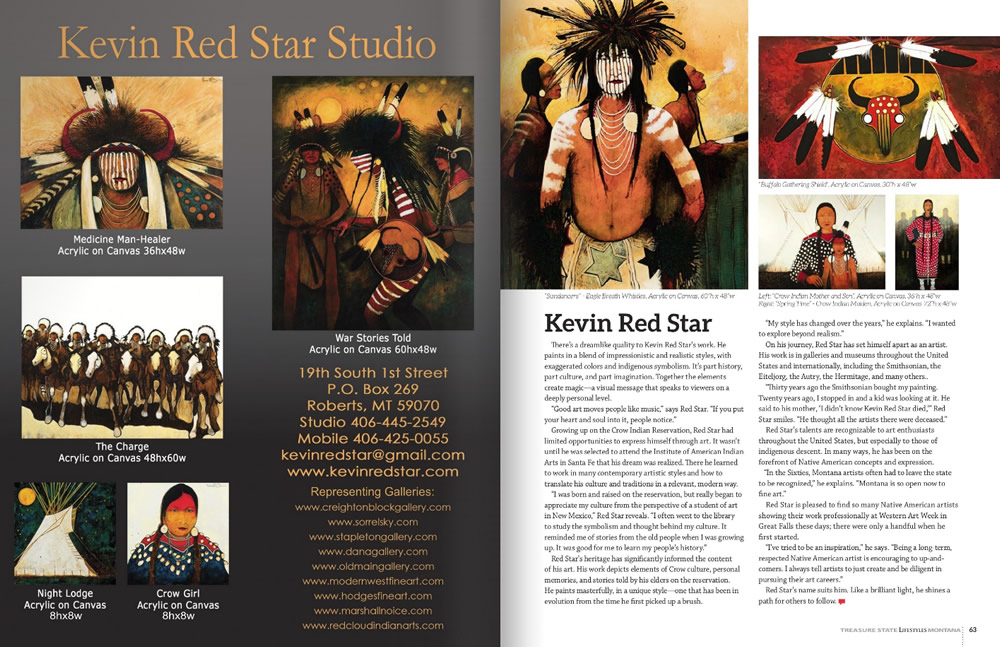 Kevin Red Star Looking Back at His Formative Days at IAIA

In the August 2017 issue of Santa Fe’s Local Flavor Magazine Kevin Red Star looks back at his formative days at the Institute of American Indian Arts.

The fall 2017 issue of Acrylic Artist features Kevin Red Star in an article by Zack Hatfield, “Pride and Paint”.  The magazine can be ordered online in print or downloaded. 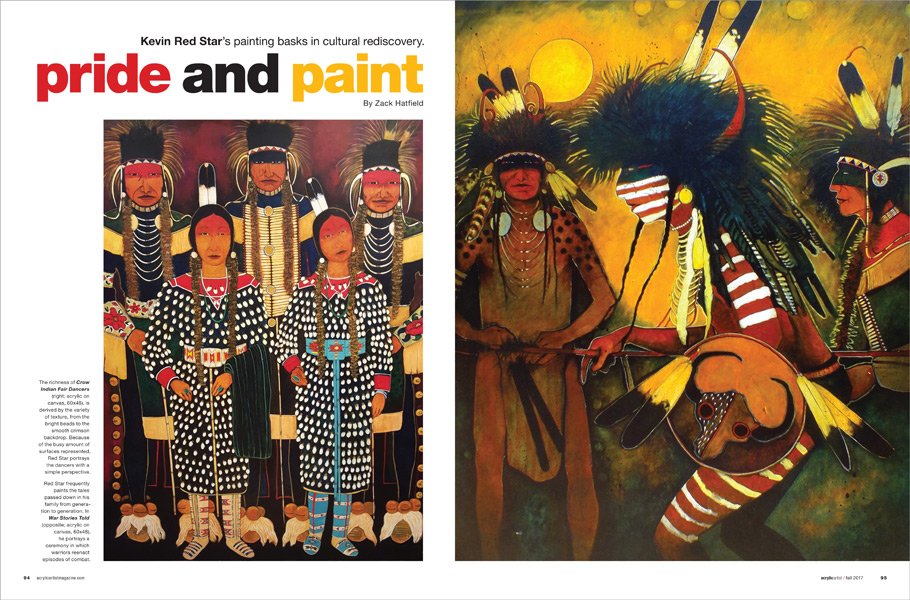 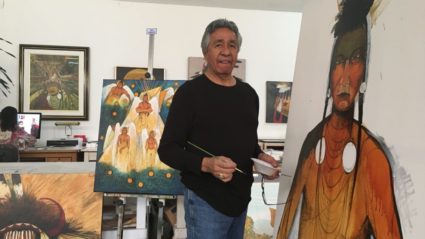 “Behind an unassuming storefront on a pot-holed side street in a blink-and-you’ll-miss-it town north of Red Lodge is the grand studio and private gallery of one of the nation’s preeminent Native American artists, Kevin Red Star.  Inside, the walls are adorned with the largest number of Red Star originals amassed in one place. These works—portraits and scenes depicting traditional Crow life with a contemporary, stylized aesthetic—are part of the artist’s personal collection and while not available for sale are often lent out for museum exhibitions.” See article… 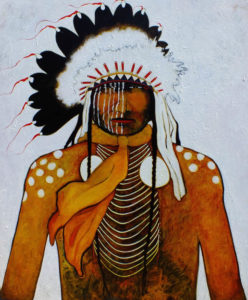 This story is featured in the August 2016 issue of Southwest Art magazine.

Whether his portraits depict warriors, healers, or dancers, Montana-based artist Kevin Red Star is renowned for bringing the Crow Indian people to life in bold, colorful paintings. Red Star’s signature works present a fresh, contemporary approach to traditional Native American art, often mixing realism with elements of abstraction. This month Sorrel Sky Gallery features 20 new works by the artist in a show that opens with a reception on Friday, August 5, from 5 to 7:30 p.m. Red Star is also one of the gallery’s featured artists during Santa Fe Indian Market.

Gallery owner Shanan Campbell Wells, who has represented the artist for 14 years, says that Red Star’s obvious devotion to his craft touches many viewers. “His work elicits something almost impossible to articulate,” Wells says. “The paintings stretch back in time, preserving historical detail that we can learn from. At the same time they capture a current moment, preserving it, and granting us continued lessons and enjoyment. I am confident that this show, presenting his new works, will produce a similar response in those people who visit the gallery.”

The Art of Running Rabbit 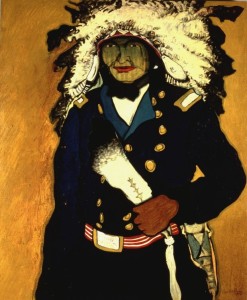 “At the heart of Kevin Red Star’s bold, modernist paintings is the tradition and history of the Crow Tribe. When one young Crow student viewed his work, she told her mother that Red Star is painting her ancestors. And the young woman was right on. Red Star has used historic photographs of his Crow ancestors, some taken by Edward Curtis and others from his family archives, to get the details right. The Yellowstone Art Museum is exhibiting its only Red Star painting in the “Boundless Visions” exhibit through 2015. It is titled The General.” 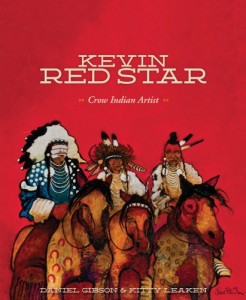 “The vivid colors and bold shapes of Crow artist Kevin Red Star are now available for your very own coffee table, in a beautiful new book that explores the painter’s life and art. Kevin Red Star: Crow Indian Artist (Gibbs Smith, 2014) is the first large-format, hardcover book about one of the most acclaimed Native American artists of our time. Red Star’s contemporary style—part abstract, part representational and wholly unique—along with his vibrant colors combine in images that convey a deep love for his subject matter: traditional Crow Indian culture.” 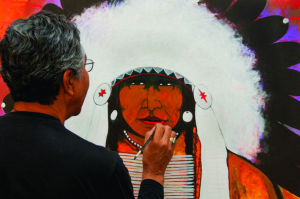 Kevin Red Star is the subject of an interesting article in a recent edition of the Santa Fe New Mexican. Highlighting Kevin’s long term residency in both Montana and New Mexico since 1962, author Daniel Gibson shares insights from Kevin on how and why he started painting in New Mexico and his participation in the Santa Fe Indian Market, held every year in August since 1921. Read article…

In August 1962, Red Star made his first airplane flight, arriving in Santa Fe from Montana to join in the inaugural class of the Institute of American Indian Arts. It was a defining moment in launching the contemporary American Indian art movement. “Many of us had come from places where we were treated badly by non-Indian instructors who looked down on you and didn’t promote you, even though you were good. It was a blessing to have that situation turned around, and given a better opportunity, the kids naturally excelled. We saw the instructors as successful people, personable professionals, and they were Indian artists. They were our models, at least mine.” 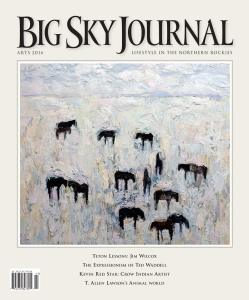 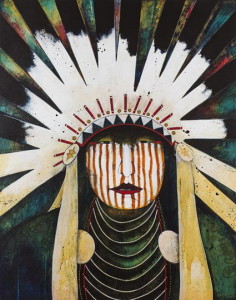 “Early October on the crow reservation in south-central Montana is a transitional time. The lush green grasses on the rolling hills and benches flanking the lowlands, nourished by summer rains, have shifted to a golden hue and the cottonwood trees lining streams and riverbeds are a bright yellow. The notched tops of nearby ranges like the Bighorns and the Beartooths are capped by snow. Red wing blackbirds creak from cattail marshes and meadowlarks perch on fence posts lining the large pastures and farm fields. Soon they will be heading south. Days are sunny, the air still as if nature is holding its breath as it slides toward the bitter cold of winter with its deep snows. People are gathering firewood, preserving deer and elk meat, harvesting the last vegetables and fruits. So it is today, so it was in the distant past, and so it was on October 9, 1943 when an Indian boy known as Running Rabbit was born into what would be a large family, and was brought home to a small house in Lodge Grass on the Crow Reservation.” 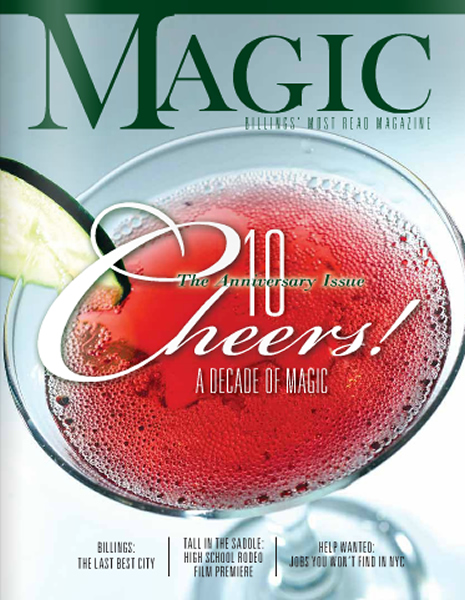 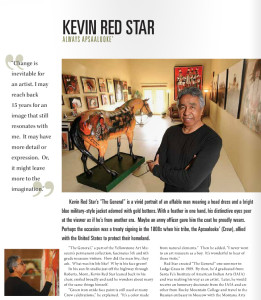 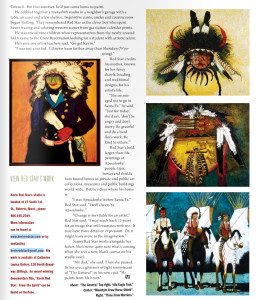