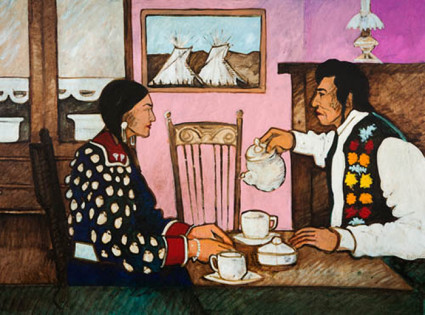 Kevin Red Star, an American Indian painter featured in the Utah Museum of Fine Arts’ acclaimed exhibition Bierstadt to Warhol: American Indians in the West, will give an artist talk at 4:30 p.m. Thursday, April 18. The talk, free and open to the public, will be held in the Katherine W. and Ezekiel R. Dumke Jr. Auditorium in the UMFA’s Marcia and John Price Museum Building at the University of Utah.

For his UMFA talk, Red Star will discuss his development as an artist and the themes in his work. Tea Party, one of two of Red Star’s works included in the exhibition, captures the tensions surrounding acculturation. “Tea Party sheds timeworn clichés to depict a Crow man and woman seated at a dinner table having tea,” said Donna Poulton, PhD, UMFA’s curator of art of Utah and the West. “Prominently displayed on the wall behind them is a painting of two teepees, revealing the juxtaposition of two cultures, but also, perhaps, honoring Red Star’s Crow ancestors, who instead of living in government-issued cabins on the reservation, chose to occupy traditional teepees.”